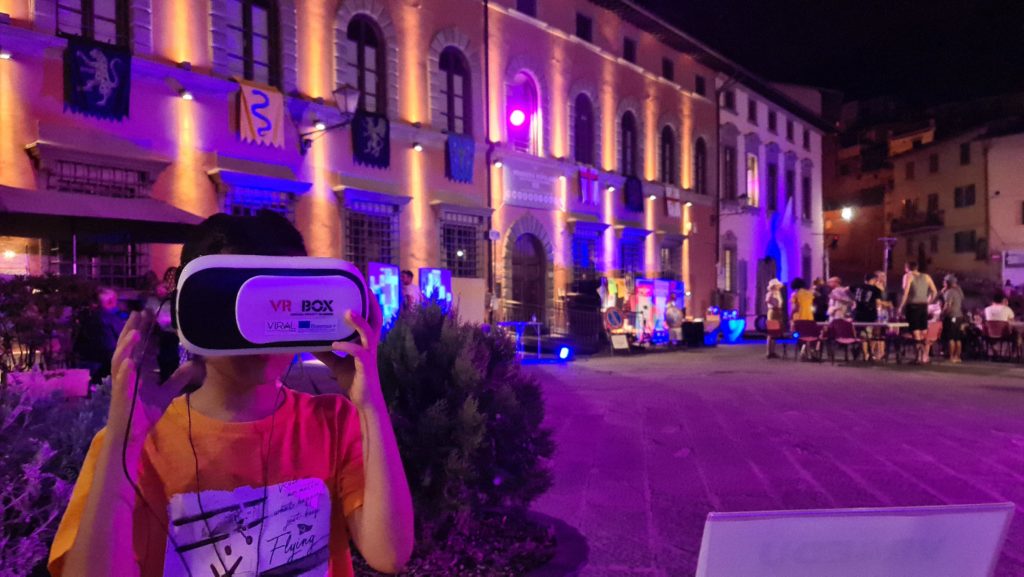 Tra I Binari is a San Miniato based theater company which has been working on participatory theater, community theater, education and event planning since 2012. We’ve been taking care of livening up the neighborhood of Scioa and its inhabitants every summer for three years, thanks to the Palio of San Rocco, a traditional celebration linked to the devotion of the patron saint of travelers and pilgrims. Also known as Festival del Pensiero Popolare, this event is an opportunity to share local art and culture, for encounters to happen between travelers, guests of the Festival and communities.

This is truly a participatory process where actors, technicians, volunteers and local communities participate in the creation of the evenings’ programs, which are always full of workshops, forays and meetings that enliven the entire city center of San Miniato, with an eye on the neighborhood’s framework. It all culminates with the evening of August 16th, the celebration of Saint Rocco, which takes place in Piazza Bonaparte.

Among the projects presented in the 13th edition we have chosen to test the CrossCultural ToolBox “Create your VR video”, designed in collaboration with the Erasmus+ project VIRAL for Local Communities, to promote a recently revitalized attraction of San Miniato’s historical center: Vicoli Carbonai. It’s a long military path, dating back to the Middle Ages, which the Association Moti Carbonari has been taking care of and promoting as a leisure itinerary and tourist attraction. The trail that is now accessible, which stretches on the southern side of San Miniato’s hill and is now sowed by roses and mulberries, follows the historic center for about 2 km, from Santissima Annunziata’s Church to a little bit further ahead of the City Hall; it has been newly made viable thanks to the dedication of members and volunteers in collaboration with the Municipality of San Miniato.

The view that opens up over Calenzano, la Marrucola and Moriolo is very suggestive to the travelers, and the care we put into the work that has the aim of preserving this side of San Miniato, has encouraged us to carry out the Festival’s opening and the launching of 2021’s program right here. Some of the people who participated in the event’s first day did infact feel comfortable in visiting yet again, thanks to virtual reality, this place which to them was already familiar and well known; on the other hand, others have visited it for the first time thanks to this immersive technology, and were thrilled about it.

We designed the journey “Le città nei Vicolo”, consisting of three episode, by following the instructions of the ToolBox which was provided to us by VIRAL (and which you can find on https://viral.nkey.it/) and by drawing inspiration from the previous experiences of our two actors, Franceso Mugnari and Simone “Sciscio” De Fazio. They decided to dress up as tourists, safari visitors or archeologists and to recite some excerpts from Italo Calvino’s work of fiction “Le città invisibili”, which idealistically goes over Marco Polo’s journey to the East as it is described in his famous piece “The Travels of Marco Polo”.

The next step after choosing the place and setting out the screenplay was that of making the videos in virtual reality, which enables us to reach the heart of the experience, feeling sensations and emotions that would otherwise be impossible to feel. Due to the limitations of the holiday season, and having to avoid small gatherings along the way, it was not easy to replicate the audience component into the video; this component would have had to coincide with the final user’s position, therefore we decided to take an alternative route. The shooting technique was also changed from the one indicated in the ToolBoox, as we preferred stationary shots working with the tripod of the 360 camera, instead of the dynamic shot using the selfie stick that we were advised to use; this was necessary to capture in a more balanced way the natural scenography and to get a better audio recording of the actors’ voices. The shooting and editing were made by Giovanni Golfarini.

The distribution was carried out in the following way: in the days of August 13th and 14th, during the Festival that took place in Piazza Bonaparte (18:00- 24:00), we arranged a VR booth, promoted by VIRAL, where anyone interested could experiment with the viewing of videos made by various Ambassadors, particularly those from the “Le città nei vicoli” journey of Tra I Binari and Moti Carbonari. During a total of 12 hours, about 30 people grappled with VR sessions, with an average time of 2 minutes per session. The average age of the participants was rather low, the girls and boys of the Scioa neighborhood between the ages of 6 and 12 were the more numerous to participate and really appreciated the product, with session up to 6 minutes. The little ones were indeed thrilled with their first experience using a VR visor. The young adults of San Miniato and surroundings, which had come to the Festival to participate and attend the theater performances, were striked by the possibility of visiting their cities through this tool, and appreciated the journey which evoked the sensation of being in two different places in time and space, at the same time.
Some were under a non-well-defined impression that they explained as being halfway between alienation and detachment from reality, which reminded them of the movie “The Truman Show”. As oppose to the film, though, through this new technology we obtained a pleasurable result, which offers a new and different fruition of the relationship between actor and spectator, as well as evocative interpretations of a work of fiction that suggests images of imaginary cities. The spectator’s active component was palpable even to an older audience, among which it’s worth mentioning the keeper of San Rocco’s little church; although with some initial wariness, the audience explored the virtual settings with amusement and enthusiasm, appreciating their likelihood to reality and trying to move inside the video, also noticing how this surrogate of theater was “more pleasant than the same old television”.

For the reasons listed above, we noticed that the absence of other spectators in the video ultimately didn’t damage the screenplay and the final result. Instead of an audience we put, in a way that is more obvious than urban or simulated contexts, a new character: the environment. Amongst the most appreciated features there was the opportunity of communicating with the natural surroundings and to verify its visible state of presence and vitality; through the sound of the cicadas and the visual impact of the rural landscape that the spectator initially finds behind his back, we were able to achieve a product which differentiates itself from those marked by a passive fruition. The spectators find themselves in an authentic open air theater, where the only thing that’s missing is one’s own body, the perception of smells and textures and the possibility to move through space. Maybe, who knows, we’ll work on these sensations in a future edition.
Tra I binari 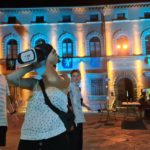 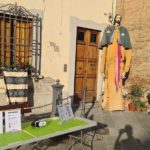 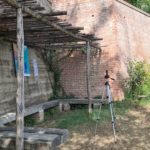 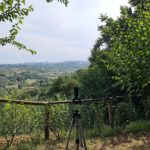 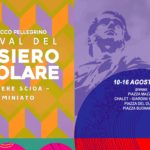